The Return of the King Book Review 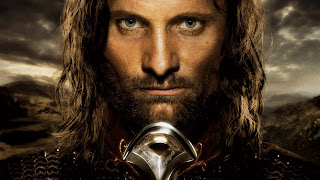 Anybody who knows me also knows that The Lord of the Rings has played a crucial part in my life. I thank my brother, Brett, for getting me involved with Tolkien's world. If he never talked me into reading The Fellowship of the Ring, I don't know if I ever would have jumped into Middle-Earth.

This completes my 9th read-through of The Hobbit and The Lord of the Rings. Guess what? Even after the 9th time, this series is hands-down the best treasure of literature I've ever read. I can think of no other story that is more compelling. The greatest strength in Middle-Earth is the depth. Tolkien did something that most authors can only dream about doing. He didn't just create a solid story... he created a universe where anybody can visit and revisit anytime. Want to sit among Hobbits, telling marvelous stories while smoking long-bottom leaf and drinking the finest ales? Read the first few chapters of The Fellowship of the Ring. Want to walk in the Halls of Meduseld, or learn to ride the best-bred horses around? Jump into the chapters of Rohan in The Two Towers. If you think your life is dark, dismal, and hopeless, read about Frodo and Sam and their walk through Mordor in The Return of the King. It will help you gain some perspective, and you'll be able to escape the real world for awhile.

The Return of the King is a spectacular ending to the epic saga. It is fast paced and full of action. It is good to see Aragorn finally claim the mantle of King.

One of the finest things about this book is seeing how much each member of the Fellowship grow. Merry and Pippen become soldiers; Frodo and Sam succeed in their quest. Gimli and Legolas overcome their abhorrence for each other and end up becoming best friends. Gandalf takes Saruman's place as the White Wizard. Seeing all the character growth is inspiring.

“Well, here at last, dear friends, on the shores of the Sea comes the end of our fellowship in Middle-earth. Go in peace! I will not say: do not weep; for not all tears are an evil.” - Gandalf the White
Posted by Jesse B. Booth at 9:28 AM No comments:

I just finished my 9th read-through of The Two Towers. Great stuff! The ending is particularly good. My two favorite characters really take form in the last 100 pages or so - Faramir and Sam.

People claim that this read isn't as good as it's predecessor and successor, but I beg to differ. A lot of important things happen in the 2nd book, and a lot of important information is given. Most people complain about Treebeard and the Ents. Yes, they are pretty boring in the movie, but in the book, there is a lot to learn from them. The battle sequences aren't nearly as long as they are in the movies, as well.

The finest part of the book though comes at the end. After meeting up with Faramir, and learning that he isn't a jerk like his brother Boromir, and would NEVER be tempted to take the one ring, he's instantly likeable. The man is true to his word, and an invaluable friend to Frodo and Sam. He's even decent to Gollum!

And then there's Sam... saving Frodo, becoming a warrior essentially. Going one on one with Gollum and chucking him off a cliff, taking on one of the most dangerous of all creatures in Middle-Earth and prevailing... and still fighting on, chasing the Orcs who have captured his master.

What more can I say about this series? I feel like I'm at home wherever and whenever I'm reading it.
Posted by Jesse B. Booth at 6:42 AM 2 comments:

I've been wanting to read this one for awhile! Didn't know it wouldn't take too long to read it!

Yes, the book is shorter than all the other books in the Shadow Series, but that's not a bad thing. This book shows Card's writing at it's best.

The writing was very nostalgic. It was like reading Ender's Game all over again. You know, the same curiosity and intrigue that captured so many of our hearts with the first book. What a great end to this series, and a nice segway into the next series.

Most of the negative reviews focus on 2 things:

1. The story is too short. Card could have fleshed out more details and characterization

Okay, really? This is the cause for concern?

1. The book was a perfect length. Orson Scott Card would only have made things drag out. There was just enough characterization that has me interested in the 3 children. I may not be invested in them, but if Card ever writes their story, you can bet I'll be.

2. Yes. We knew it was coming. Yes, he died just minutes before he found out about a cure. Guess what? He's human. He's not a god, just a major genius. And the fact that Card was willing to cut Bean off shows some... maturity? That may not be the right word. Suffice it to say, Card made Beans character even stronger with his death.

Great job, Mr. Card. I really appreciated the story.
Posted by Jesse B. Booth at 7:43 PM No comments:

Warning: The events of this story are based on real happenings.  This story may shock you.

Once, not too long ago, like an hour and a half ago, a handful of legends played a game of pickup basketball with some previously not well-known basketball players.  The teams were lopsided; victory was far from a dream.  Defeat was laughable.  Unimaginable.  But somehow, it happened.

Who should win this game?

Well, my friends, the legends met something they did not expect. No referees. Call your own fouls.  So, these guys who are used to bumping, nudging, let-em-go ticky-tacks start getting fouls called. And not just a few.

Every defensive play against the No-Names resulted in a foul.  In most cases, there were several fouls called.  Clyde the Glide and Hakeem the Dream were confused: why all the calls? It messed with the flow of the game.  It made the game one-sided. Most of all, it made the game not fun.

Same thing happens, except this time, the legends start calling fouls, too.  Arguments break out. "I didn't touch you!"  "That was a jump ball if my arm is considered the ball."  "But it was after the shot!"

Game 2 ends with another loss for the legends. What was going on?!  This was unbelievable!

Moving onto game three, the legends come out with a dominating presence. The score quickly escalates to 7-0.  And then guess what? Foul! What? Foul!

Ike Austin hits a miracle 3 to win it.  How did this happen? George Muresan's FLAGRANT elbow throwing in the lane. Quintin Richardson's ugly flopping. Jiggy Watkin's 'You touched my pinky! Foul!'

What has the game of basketball come to? All I know is Drexler is done playing ball with Muresan.  And Olajuwon maybe done, too.  LONG LIVE PURE BASKETBALL!
Posted by Jesse B. Booth at 9:59 PM 1 comment:

I have finally begun the continuation of writing my current novel, The Network.  It has been a few months since I had my break-through.  I was reaching about 60,000 words and in the process of concluding this special story when all of a sudden, the main character did something I had not planned.

You see, when I wrote Core of the Nations (for the final time) I knew exactly every event I wanted to include from beginning to end.  Sure, there were things that came to me as I wrote, but they just added to the meat of the story.  I decided to go about writing The Network a little differently.

I started with one concept.  I wrote it out and wanted to see where it would take me.  While this is probably not the best way to write, this experience has been amazing.  I'm writing things that are surprising me.  My characters seem real to me, doing things I don't expect.  I feel like I'm best buds with the main character, and I really feel for him at times.

I was reaching what I thought was the tail-end of the story.  I felt good about things.  Resolution was approaching.  And then my main character opened the door for more.

I stopped myself, wondering if I should delete the paragraph and just force the ending.  But something inside me told me to continue.  So I kept the paragraph and shut the laptop.  I haven't opened the Scrivener file since... until this morning. It's been a couple of months.

I had 30 minutes before work this morning.  I took the time to go back through a few of the chapters and take a look over some of the events I wrote about just to make sure I could pick things up, and surprisingly, I did!  I only wrote a little bit, but what I did write was gold!  During my lunch break, I opened my laptop up once again and the writing just gushed out.  Beginning part 2 of the story was exhilarating.  And I loved every word I dumped!  I was disappointed to see the time fly by.  Back to work!  I couldn't think of anything else the entire time I was working.

My writing hasn't been neglected, though.  I wrote a short story for a publication contest coming up in January.  Those who win will be notified between September and December, so hopefully I'll get a nice letter saying "Awesome, we loved this story! You're the next big thing!" (just kidding)  It was a very fun piece to write!  The contest is based around bizarre, out of this world stories.  The publication is called "Imaginarium."  And it just so happens that I had a bizarre idea infiltrate my mind a month or so ago.  Well, once I got the invite, I wrote the story.  If any one is interested in reading it or wants more information about it, feel free to contact me.

So, tonight I will continue my writing of The Network.  I have fallen in love again with the story, and am devoted to finishing it.  We'll see how it all ends. :)
Posted by Jesse B. Booth at 3:40 PM No comments: