One Hundred Voices Vol. 2 Release and other fun 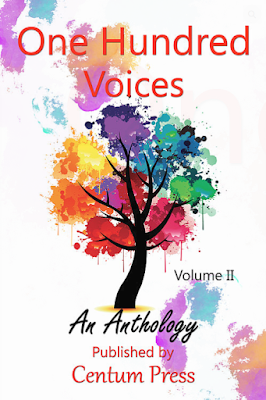 It's official, bloggity blog. I am published! My short story Unseen was accepted by Centum Press, and they added it to their 2nd volume of One Hundred Voices. The book was just released, and is now available for purchase! I'm waiting for my limited edition hardback to arrive. Here are some links to buy the anthology if you are interested:

Centum Press Store
There is a benefit to purchasing straight from the publisher. First, you save $5 right away. In addition, you can save 10% more if you use my author discount code at the time of purchase. My discount code is: 100V2V17

To go along with this news, I'm excited to announce that Centum Press has accepted another short story of mine for their animal themed anthology entitled One Hundred Tails. It is set to come out in the spring/summer. My story is called Off The Hook. It is about a fish who rallies the other fish in the lake to fight back against a group of ice fishermen. It's a comedic piece, something I have never tried my hand at, but have received positive feedback on from family and my writing groups. Stay tuned. There are fish puns galore in it.

Okay. Writing update. 2 years ago I set out on a journey to write my first fantasy novel, entitled The Shadow Wielder. If you've been following me, the book has evolved into a series. In 2015, I wrote the first draft of Book 1. In 2016, I spent a lot of time editing and revising it, then jumped into my "in betweequel" called Orbs of Memory. I completed the first draft of it, and I haven't touched it since. It's about half as long as Book 1, but gives crucial information about my world. So in two years, Books 1 and 1.5 have been written. Starting in November of last year, I started into Book 2, but I didn't care much for where the story was going. In January, I decided to slam the axe down, and picked up at the end of chapter 1 to take the story in a different direction. It's been a crazy ride. In January alone, I wrote just over 50,000 words, which is about as long as Orbs of Memory is in total. As planned, Book 2 is looking to be about as long as Book 1 (110,000 words). I am not planning on writing another 50,000 words in February, so I will not be finishing the first draft of Book 2 this month. I had to sacrifice my reading time to hit my 50k word goal last month, and I really need to read. My writing takes a hit if I don't. So I have a 30,000 word goal this month. This means that sometime in March, the first draft of Book 2 will be completed.

What can you expect after the completion of Book 2? Well, in my last blog post, I indicated that I had changed my mind about the series, and that I was making it a duology. Now that I am about 60% done with Book 2, I can safely say that there will be a Book 2.5 and a Book 3! I am already outlining Book 2.5, and it's going to be a fun one to write. Book 3 is still in preliminary stages, but the setup in Book 2 has been a lot of fun. Valodin has become my favorite character in the series, and the Nomahni people are just epic.

My plan is to finish writing the entire series this year. I am a bit terrified at the prospect of revising and editing 400,000 words. It's going to be a long process. But I think it will really tighten up my story. I might take a break from The Shadow Wielder series from time to time to write a short story here and there, because I'd like to get into the habit of releasing them more frequently.

As always, if any of you would like to read my stuff, I'm happy to distribute it for free! Just let me know!