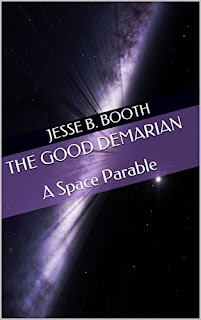 Just thought I'd drop a quick note and update everybody on a few things. First of all, I am releasing a short story I wrote back in September based on a writing prompt from Brandon Sanderson. The goal was to write a Bible story with a sci-fi spin. After narrowing down a few options, I decided to go with The Good Samaritan. The handful of Bible verses don't provide much detail, so it was fun to make the parable mine. The story is called The Good Demarian and tt releases on December 1st both in Kindle and audiobook formats. Here's a link to the Kindle page. The audiobook is in the process of being recorded and refined by the talented narrator B.L. De Vito. It should be available on Audible around the same time.


Also, the first draft of Book 1.5 of The Shadow Wielder is complete. I'm having to step away from it for a bit while I write the beginning of Book 2 for NaNoWriMo. I'm not taking NaNoWriMo too seriously this year. I'm just writing a bit here and there, and updating my word counts. It's the 10th of November, so to be on track to finish the month with 50k words, I should be at about 17k or 18k words. I'm sitting at 3k. And you know what? That's okay. I could be making the time, but I've learned a few things about quality vs. quantity. I've participated in NaNoWriMo 8 times. I appreciate what it does for writers, but I'm at a point now where I don't feel like I need that extra help grinding for a word count.

Last bit of news... I've changed things once again with The Shadow Wielder series. My initial outlines allowed for a trilogy. After rehashing the outline, I've determined that this should be a duology. Why? you may ask. Really, I don't want Book 2 to be suffer from the "Book 2 Sloggy Syndrome" that so many do. I don't want it to be a slow book that preps for an epic Book 3. This will help the pacing of Book 2, and make it an overall better book. The series will feel tighter and more complete. Now, technically, there will still be 3 books to the series. But it won't be a true trilogy. Book 1.5 has a completely different feel, and is not required to understand what is happening in Book 2.

Duologies are not common, and I really don't understand why. I think there is an expectation that if a story is not a standalone novel, it should be a trilogy, or even a bigger series. I don't know how this became the norm. But I'm going against it, and I believe it is for the better. I guess we'll find out in about 97,000 words. :)
Posted by Jesse B. Booth at 11:07 AM No comments: