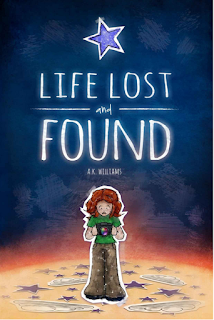 Have you ever finished reading a book and thought, Man, that main character felt so... real? This is one of those books. I know Madeline Elizabeth Parker. I know her past. I know the terrible things she has gone through. I was there with her, through some of it anyway. As a fly on the wall. No, more than that. More than just an eye-witness. I was a thought-witness. And through the tough experiences she goes through in the book, I longed to reach out and pat her on the back, or give her a hug, share some words of comfort or advice... but I couldn't. So I had to trust the other characters to do it for me.

This story is told from the heart. A.K. Williams delves into some deep darkness everyone has likely felt at some point or another in their lives. But it isn't all sadness. It isn't all about hopelessness. It's about a person becoming more than she was. It's a person discovering for the first time that she is more than just a hate-magnet. A person who is lost, but finds herself.

Treat yourself to this book. It'll have a lasting effect on you. It'll change the way you view yourself, as well as those around you.


All proceeds for this book go to charities. Please consider purchasing this book!

To find out more about this book and the author, go here!
Posted by Jesse B. Booth at 7:14 AM No comments:

What a year! I got a lot accomplished this year, and it has been... well, FUN! There's never a dull moment at home with a 5 and 2 year old. I got a new job, I was able to walk for my college graduation back last December, and I wrote a 100,000 word novel!

From my nerdy favorite things, several things released this year that made it even more epic. Halo 5, along with several Halo books came out, and the depth of the stories told in that universe have been very enjoyable. Sanderson released the 2nd book in The Reckoners series, Firefight came out, and it's fast-paced awesomeness was... awesome! (Calamity is set to come out February 2016! Yay! Final book in the series!) The 5th Mistborn book, Shadows of Self, came out in October and it did not fail to impress! The next book comes out in January! Next year is looking mighty fine, too!

I spent a ton of my free time writing The Shadow Wielder this year. I completed the first draft 2 weeks into November, during NaNoWriMo. I haven't even looked at it since, which is too bad, because it needs a lot of help. I finished it, and was happy with how things ended, but it needs some major cleanup. Unfortunately, busting out massive word counts usually results in poor writing. At least for me, that is. The good new is, I didn't stop there. I am coming up on the end of the prequel to The Shadow Wielder. It is a much smaller book, more of a novella. But it gives good insight about the chain of events that resulted in bringing the Shadow Wielder to power. So cool! My working title for the novella is Lose to Find. That may or may not change.

Looking at my Goodreads list, I have read 45 books this year! That's the most I've read in any year, at least since I started recording back in 2006. I can't believe I read that many and was still able to write one. To check out what I read in 2015, click here. There were some bad ones, but also some really good ones! You might find something you'd like to read based on my ratings/reviews.

So, what's left this year? Well, I just finished watching The Hobbit: The Battle of Five Armies Extended Edition along with all 9 hours of special features. Star Wars Episode VII comes out in two weeks! And then it's Christmas and New Years! It's gonna be a fun month, and a good close to 2015. There is much to look forward to in 2016, and a novel to revise and prep for alpha readers! And, the sequel to The Shadow Wielder is waiting to be written.
Posted by Jesse B. Booth at 12:53 PM No comments: